If you are new to the field of cable provider modems and getaways and you have little knowledge about it, let me help you with that. You might think that companies such as Comcast, Time Warner, Cox, and Charter provide you with the best and most reliable hardware, but that’s not true.

These companies want to make as much money while giving to the customer as little as they can. They get all the talk since they provide the service for a large number of people.

These companies will provide you with modems, gateways, and routers that are no better than the Linksys Cm3024, which is on our list of 2016 Top Picks.

This article will be a guide for you to choose the best cables modems on the market.

At first glance, you can see that it has a modern design, which for me, is something quite expectable. Hardware makers are making more efforts to produce contemporary and fashionable external designs.

A perfect example of that is the D-Link AC3200, which has a crazy design looking like a space ship. This might not float your boat, but it is a refreshing design compared to the Linksys Cm3024.

The point is, the Linksys Cm3024 doesn’t look that bad, but it’s just a basic one.

On the front of the router, you have 5 LED lights that indicate power, send and received status, and Ethernet. On the back, you have the reset button, power connector, internet port, and cable connector.

The top and sides of the unit are well vented, giving it the capability to cool down rapidly. Overall, the Linksys Cm3024 has a basic design but is robust. 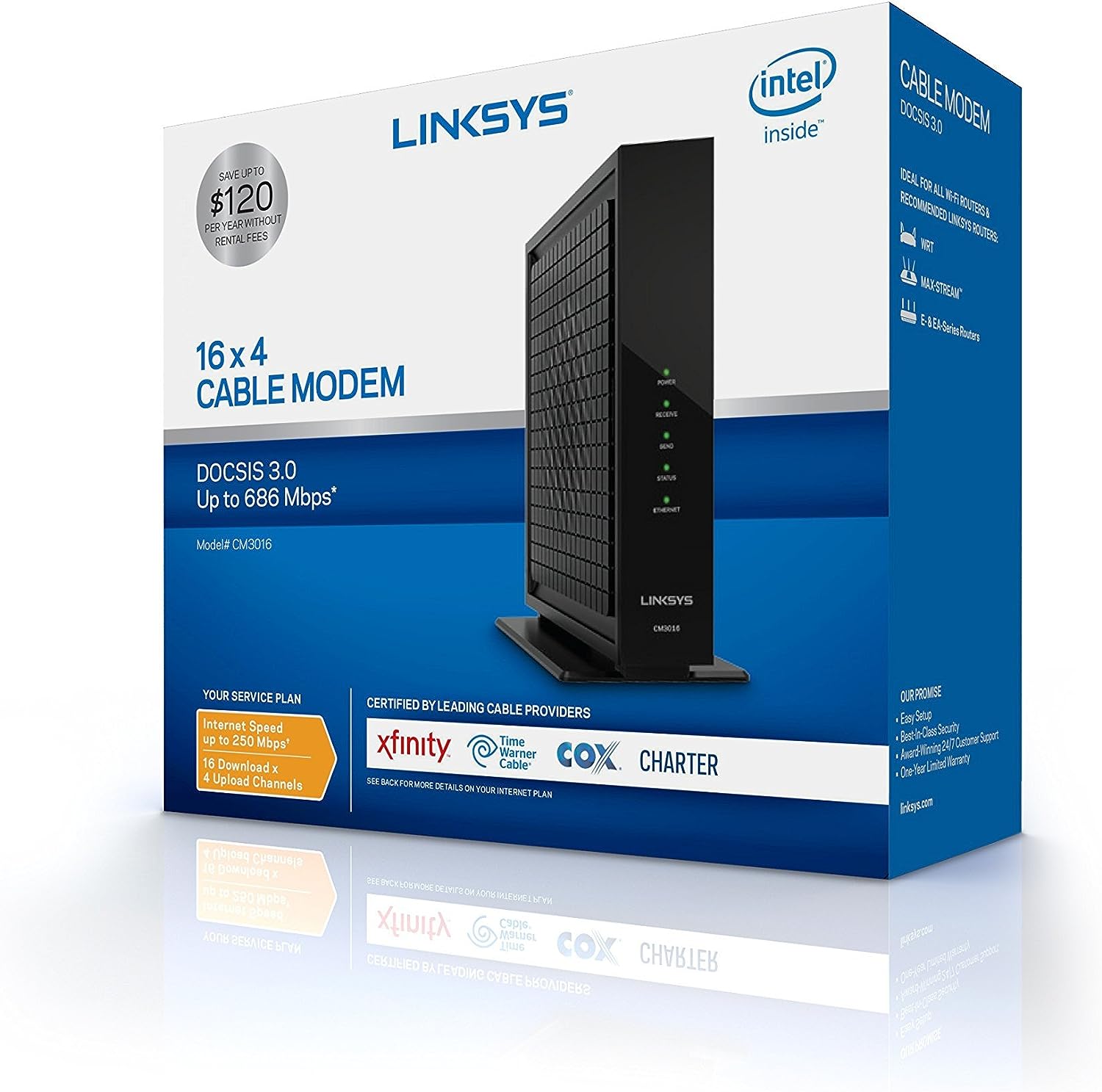 The setup on this device is straightforward. However, registering it with your cable provider might be the most challenging part of the process.

In my case, having Comcast as my cable provider, the process took me about 10 minutes to complete. I had to follow Comcast’s registration process set up for the hardware before going online.

If you have no glitch, this should be easy. I don’t have experience with Time Warner, Cox, Charter, or other providers, so I’m not sure how it goes with them.

All you have to do now is to plug the cable connection and the Ethernet cable into the Linksys Cm3024, and you are ready to go.

The setup is not rocket science, as you have no software to deal with.

Currently, this is one of the highest speeds you will get on the market. Some Hardcore techs might tell you to wait for the DOCSIS 3.1 version, which will have Gigabit internet, which you could. However, how much time will you keep waiting for it to be launched, and at what price will it come?

If you are a Gigabit internet enthusiast, the Linksys Cm3021 might not be the best fit for you, and you won’t be satisfied with it. Nevertheless,

if you are on a budget, I do recommend that you get the Cm3021 as it has reliable and sturdy performance, and it won’t disappoint you. The router that came with Comcast worked just fine, but I knew it was slowing down the network performance, which was apparent when I was online.

Eventually, I had to replace it with the Cm3021, which considerably increased my internet speed. As stated above, setting up this cable modem is no rocket science. The most difficult part of the process might occur with your cable provider.

The speed on this device is incredible. Unfortunately, if you live in an area like me where you can’t have the maximum benefit of the DOCSIS 3.0, your internet speed won’t reach 960 Mbps. Still, I had a steady speed of 100 Mbps (wired). I’m paying for an internet plan of 75 Mbps, so I’m more than satisfied with the 100 Mbps speed.

If your internet plan is 100 Mbps, theoretically, you should have a speed of up to 343 Mbps. If you can afford to pay for a 300 Mbps internet plan, you will get the most out of this device, reaching a 960 Mbps performance. I used the Linksys AC1200 USB Wi-Fi adapter with my D-Link router, and it increased my internet speed to over 80 Mbps.

Something you have to understand is that the advertised speeds of DOCSIS are not always fully reached. This will depend on your hardware and the source’s hardware too. To understand more how DOCSIS and internet speeds work, check OOKLA’s website: https://www.ookla.com/

The router costs $129.99. It might seem a little bit expensive for you, but it’s totally worth it, and its performance won’t disappoint you. You can have it paid off throughout a year instead of paying for the provider’s hardware all the time.

If you are someone who gets easily angry by a slow internet connection, this device is for you my friend! The DOCSIS 3.1 version is not available yet, so you have to wait to get a faster speed than 960 Mbps. If you are using your provider’s gateway, you have to use your own router to make the Linksys Cm3021 function wirelessly. Ultimately, I recommend you use your own router/modem to save money but also to bring you fast performance.